Better late than never, here is a race report from Andrea Saliba on the half-marathon in her native Malta:

On Sunday 25th February 2018, for the Vodafone Malta Half Marathon there was transport provided from Sliema at 7.45am which was organised and efficient. We made our way up to the old capital city, Mdina and the half marathon started at 9.15am. There were over 4,500 applicants this year; including locals and foreigners, making the start line quite crowded. It was my first race and the nerves were gradually building up, although I was taken away by the cheerful atmosphere and beautiful views of the Maltese island. Howard and I wore the Claremont shirts proudly and made our way through the Maltese streets. There were bands playing and people cheering at intervals along the route which offered a boost. There were water stations at 5km, 9.5km, 14.5km & 17.5km and Powerade stations at 6km & 17km. There were sponge stations at 6km, 15.5km & 19.5km which were eagerly welcome as it was 19 degrees Celsius. Howard did his usual if too hot, suns out, guns out. The route was mainly downhill from the start, or flat near Valletta blue harbour, plus the odd few steep inclines that was agitating Howard injuries. There were quotes such as “keep going”, “you can do it” written on the road towards the end of the race which I found helpful to motivate me to give it my all. At the finish line they handed out a huge medal, water, Powerade, bananas and foil blankets. Howard took advantage of the free leg massages from the Maltese ladies. It was a really nice atmosphere and fast race to do, I’d surely recommend it.

My husband ran too; and a few others from the North East Gateshead Harriers – Nigel Camilleri, Chris Hainsworth and Andrew Bennett from Belfast Orangegrove AC. The later unknowingly having eyes on beating Howard, but fell short by 16 minutes. Howard Dad came to support partially, but mainly to visit the historical parts of the island. The race is mainly always on the last Sunday of February and next year takes places on 24th February. It’s a nice winter break, if you want a long distance run in the sun with views. 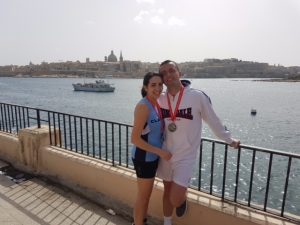 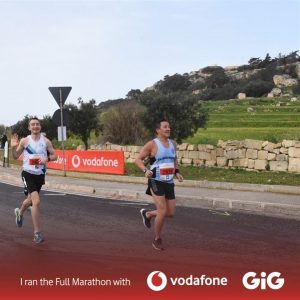 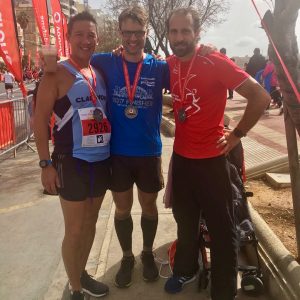