Dave Wotton is the latest sky blue to do one of these daft ultra events – well done, Dave, but I think you are mad! He sends this report:

Just a not so quick report on the Rotherham round
So you want to enter the the Hadrian Hundred!
Ah but you need to do a qualifier so I decided on the Rotherham round.
There was other qualifing events but this one was the right sort of time and mega cheap to enter at only £17 plus the option of a tee shirt at £6. So for 50 miles an absolute bargain.
The only stumbling block is the fact that there is only four weeks until the event.
To cap it off when you’ve only been doing an occasional park run and the odd half, not exactly the best way to tackle 50 miles.

so I decided to enter then my sister says you may as well sign me up , and a friend I run with a lot that’s never ran over 13 miles says Dave I’m up for that.

So that said 3 of us entered we decided on doing a training run at predicted race pace .
In which we done 25 miles in 6hrs .
Slow I know but get there.

So come the morning of the 20th up at 2.30 to set of to Rotherham for a 6 am start.
We arrived at race hq numbers sorted etc.

So 6am and we’re off .
We walked pretty much most of the first 2 hours in the dark and the plan was to walk everything up. Getting toward the first check point we had two competitors who seemed to be keeping pace with us . Later to find out that the guy Jon had only ever completed a 10k race.

So we get into the first check point and I duly oblige by stuffing my face .
We’re all done and leave ch/p1 and Jon &Jane come out with us .
So on we go to check point 2 and move on still being shadowed.
At some point between 2&3 we got chatting to Jon & Jane and they had said that they had decided to just try and pace with us .
So 2 new friends we had.
So into check point 3, fed watered etc just about to set off again and another competitor Tracey say is it ok if I tag along with yous.
Well of course.
So what started as 3 is now 6.
So off we set a little running and plenty of walking so it seemed into check point 4
Where there was a bag drop and as always plenty of food and drinks.

And then on to ch/P5 without any major hiccups .
It was after ch/P5 that the chinks started to appear . We were starting to loose time but I felt at that point being around 40 miles down that I did not want to split our little crew up or for one of us not to complete .
All I could do was to try and spirits up .
We got through ch/p6 Tracey was really finding it difficult.
Jon however had been struggling from about 15 miles so I think he had just resigned himself to the fact that he just had to go on and keep moving.
We got to the last check point 6 I was as up beat as I could be to rally my troops.
Then off we set striving for the finish.
We did not manage to get back before darkness set in.
We landed at the finish in around 13:22.
We had set a time of between 12 and 14 hrs so we’re well pleased with our achievement.

What a fantastic day out and a great event.
Many thanks to Rotherham harriers. 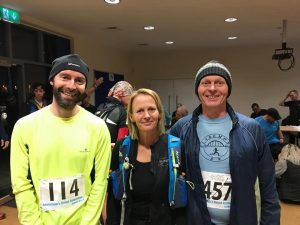 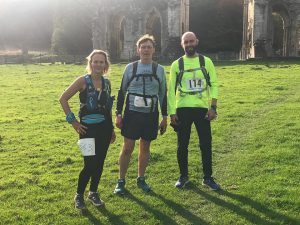 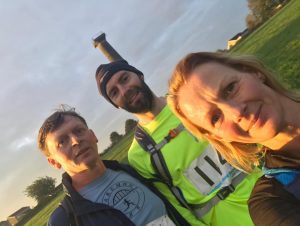