Thanks to Cath Robson for the report on the final leg of the Claremont Tyne Ultra.

What a grand day out we had covering the final section of the mighty Tyne on its way to the sea!

About 20 runners assembled at the Swing Bridge; for some this was their first leg of the relay while others had covered every mile of its route from modest beginnings high in the hills and we were even joined by our ‘celebrity runner’ Megan Al-Ghailani and partner, Brendan. As always (!) the sun shone on Tyneside and showcased the region splendidly for our visitors. As this was the urban stretch of the ultra there was no need for bus back up and so, at 9am prompt, some of the team headed uphill to catch the Metro while the rest of us jogged off along the Quayside. Many of us soon warmed up on this unseasonably mild morning and layers were shed as we passed the Ouseburn and on into Walker. No cows to contend with this time but a single, tethered horse (initially mistaken for Batman – you had to be there!) watched us pass. After an hour we arrived in Roman Britain with roman baths signposted to our right and Segedunum on our left. As we approached Hadrian Road station we were ambushed by the Metroriders and, after brief sugar-based refreshments the larger squad continued east using the North Tyneside Waggonways – less nettles and thistles but more glass and dog poo than countryside sections it has to be said… Soon we were crossing the A19 and being encouraged by Mungai, who had nipped along to Percy Main, and then on through the waggonways and streets into North Shields. Before long we could see the sea and were heading along the Fish Quay, including a close encounter with some fishnets, and on towards the Collingwood Monument. A short, steep hill provided a final challenge before a downhill swoop towards the end. For the first time the finish time (11.30am) and distance (12 Claremont miles) were exactly as predicted by mapmaker extraordinaire, Janet!!

Unfortunately, the pier was closed for maintenance but we made up for this with a ‘bracing’ paddle or, in Richard’s case, dip! Then it was off to the Gibraltar Rock for well-earned food and drinks.

All in all, a fitting end to an awesome club event with special congratulations to the runners who completed the whole distance of both the South and North Tynes to the sea – Nina, Julie and Jamie. Unfortunately, Mungai couldn’t run today but once the pier reopens and he’s back to full fitness, there will be definitely be a return visit!
Now… what’s next? 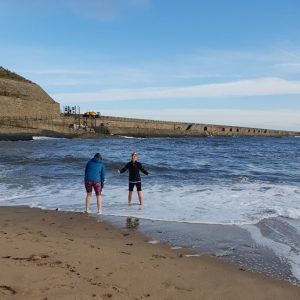 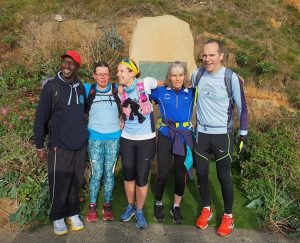